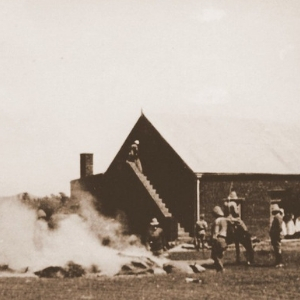 The Second War of Independence: The thwarted “Jameson Raid” was the brain child of C.J Rhodes and several greedy high ranking British politicians, carried out by L.S. Jameson. The ZAR government handed their captured raid prisoners over to the British for trial, naively believing that justice would be done. Sadly this was not to be. Britain proceeded with a massive build up of troops. The two new Republics, feeling threatened, formed an alliance, which Britain chose to interpret as aggression. Despite several Republican conciliatory attempts, war was eventually declared. The Trekker Republicans took on the might of the entire British Army and very nearly won. The story of this cataclysmic war, with all its atrocities, holocaustic horrors and poignant sadness, is rendered in this chapter.